WHEN – The CCPA was signed into law in July 2020. NY Renews has been organizing for years, since the People’s Climate March of 2014. 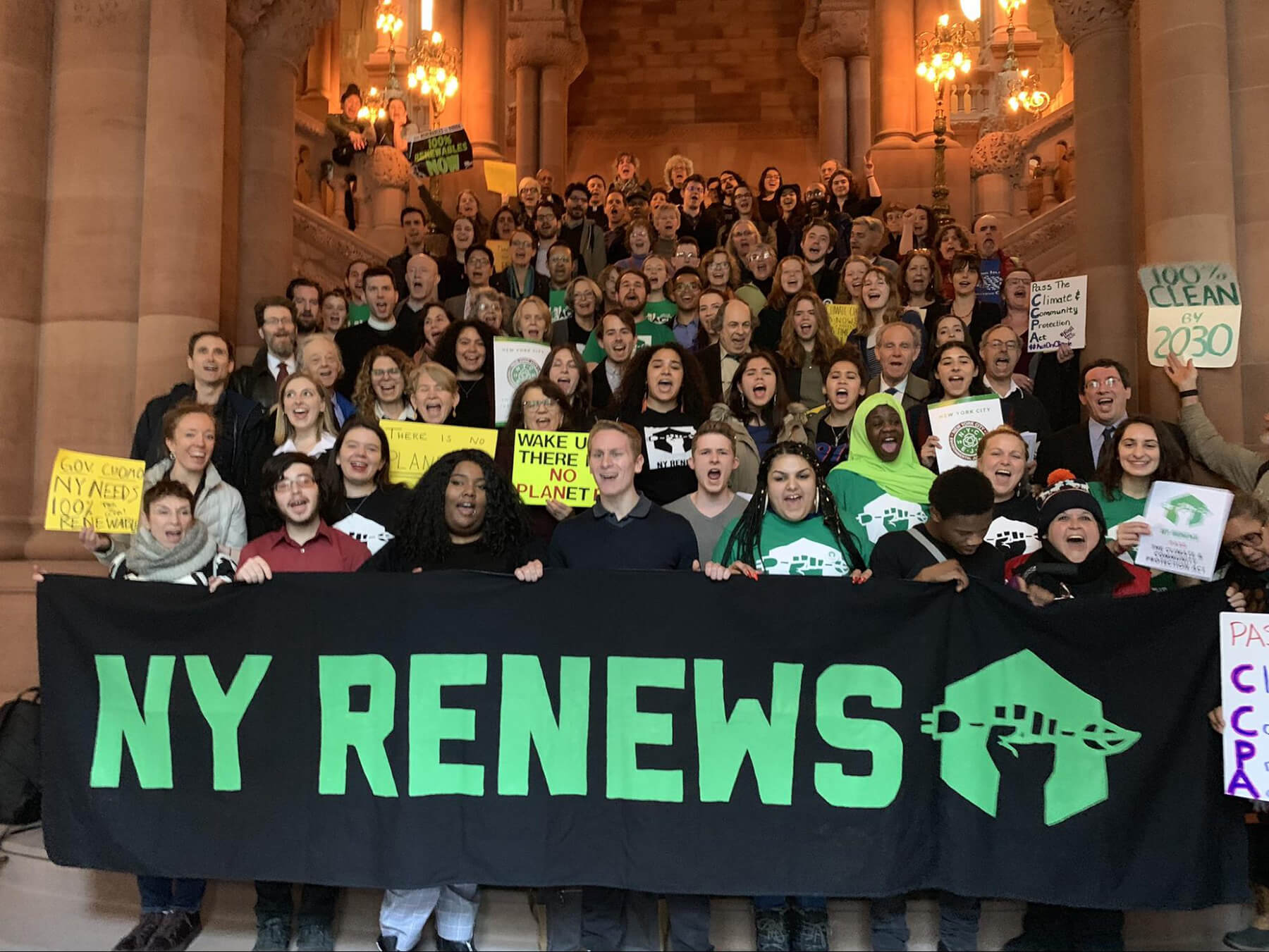 The Climate Leadership and Community Protection Act was a legislative victory driven by the NY Renews coalition, which had been working on the legislation for several years before its passage. It was put forth to create guidelines for the state to usher in a just energy transition to address the climate crisis. The vision of the CLCPA has been centered on three things from the beginning:

1) Climate: The Act aims to set targets for New York State to reach zero emissions, with renewable energy in every economic sector by 2050.

2) Jobs: The Act aims to set provisions for strong, good jobs that would be created in the energy transition through labor requirements and training standards.

3) Justice: The Act aims to ensure that the transition is equitable for New Yorkers, by investing in the communities most impacted by the climate crisis and pollution.

In the final bill, New York state is on a path to reduce state-wide greenhouse gas emissions by 85% by 2050 and to net zero emissions in all areas of the economy by the same year. 35% of investments from clean energy and energy efficiency funds must be invested in disadvantaged communities. Read more about the CLCPA on NY Renew’s website here.

The CLCPA was passed by the New York state legislature, the assembly and senate, who then forwarded it to Governor Cuomo to sign it into law.

Organizers believe that the New York state legislature was very uniquely positioned to pass this legislation. Before 2018, the Senate was controlled by Republicans – but not because there was a numerical majority. An Independent Democratic Caucus was caucusing with the Republicans. This bill had been introduced for three consecutive years, and that caucus prevented it from moving forward, because it would continually pass in the Assembly but not in the Senate. In 2018, because of electoral organizing, many members of the Independent Democratic Caucus were out of congress, and Democrats regained control of the senate. This was part of a broader progressive wave that not only eliminated the IDC but brought climate champions into leadership positions in the legislature and a tidal wave of energy to grassroots advocacy. This was a transformative shift in political conditions for the state, and created an opportunity to pass many progressive policies that had been introduced and stalled for years. The CLCPA was one of those things.

“The coalition had been working on this for quite some time before 2018. We knew we had to continue to put pressure, to let them know it’s a priority, and that the urgency of the climate crisis meant that it had to happen now.”

In the organizing process, NY Renews put constant pressure on elected officials. They mobilized actions across the state and in Albany, the capitol, to get people to talk about the bill. They demonstrated the will, desire, and momentum of the people to make this legislation happen in New York State. Governor Cuomo was initially in opposition to the bill, stating publicly that he did not think it would ever happen.

“We also worked to get him on board, and let him know that this ship was moving whether he liked it or not – either he would support climate action in New York or he wouldn’t. Our work made him make the right choice. Legislators knew there was a movement behind this bill. They felt it. We made it feel like it was inevitable.”

The legislation is designed to benefit New Yorkers everywhere. It will move the state off of fossil fuels and into a renewable energy-based economy while creating jobs. By centering the communities most impacted by climate change and pollution in its implementation process, it will also address historic disinvestment. It was important for NY Renews to create legislation that is actively working to protect and empower communities that have been ignored by the state. The CLCPA is designed to get New York on a path to addressing the climate crisis, but only in a way that invests in those people that need the most investment.

What is the problem they’re working to address?

The problem the CLCPA intends to address is the climate crisis, and co-occurring crises of racialized inequality across New York state and the world. Coalition members like Demos, PUSH Buffalo, and others entered the NY Renews coalition because of their views of climate change as a racial and economic justice issue.

“The climate crisis is actually impacting certain communities more than others. We have to say that clearly. The communities most vulnerable are vulnerable because they have been disinvested in. We have to address inequality or else we are reinforcing it with energy development. We don’t want a renewable energy economy for the 1%. We want a renewable energy economy for everybody. We are setting a standard for what it means to address the climate crisis. We are not addressing it if we’re not supporting all the people, and these people specifically.

Who is organizing? How are people organized?

The bill was designed and written by a diverse and powerful coalition, NY Renews. NY Renews represents a huge swath of New Yorkers, including groups working around environmental justice and/or racial justice, faith-based groups, people who work specifically on policy, and more. NY Renews formed from the energy of the 2014 People’s Climate March in New York City. Local organizers used that energy to create a vision for how to get New York to implement renewable energy and mitigate their own emissions.

Organizers traveled across the state having conversations with people about climate change and its impacts, and then formed the coalition. Coalition members are those organizing across all different regions of the state.

“Many of the NY Renews members are movement-building organizations. They have a base in communities and in workers. They know that in order to improve the lives of their members and communities they serve, we need to actually change policy. That is part of building movements. They know people’s lives are going to be impacted by the way the state directs large-scale investments into things like transportation and energy. That’s why this had to be a coalition effort. So all of the different communities can be seen by this legislation. That’s why NY Renews came together, to imagine what a policy that did this could look like for real people in New York. What we’re imagining is, what scale is needed to meet this crisis? It means mobilizing state infrastructure and investments. There are many theories of change, and there is a role for legislative advocacy.”

Most important, the coalition is strongly aligned on their principles of unity. Creating the coalition and the legislation was a process that centered and uplifted those most impacted. Specifically, NY Renews operates through the Jemez Principles for Democratic Organizing. These principles helped them shape and integrate racial and economic justice into the design of the policy. That is the foundation of the CLCPA. 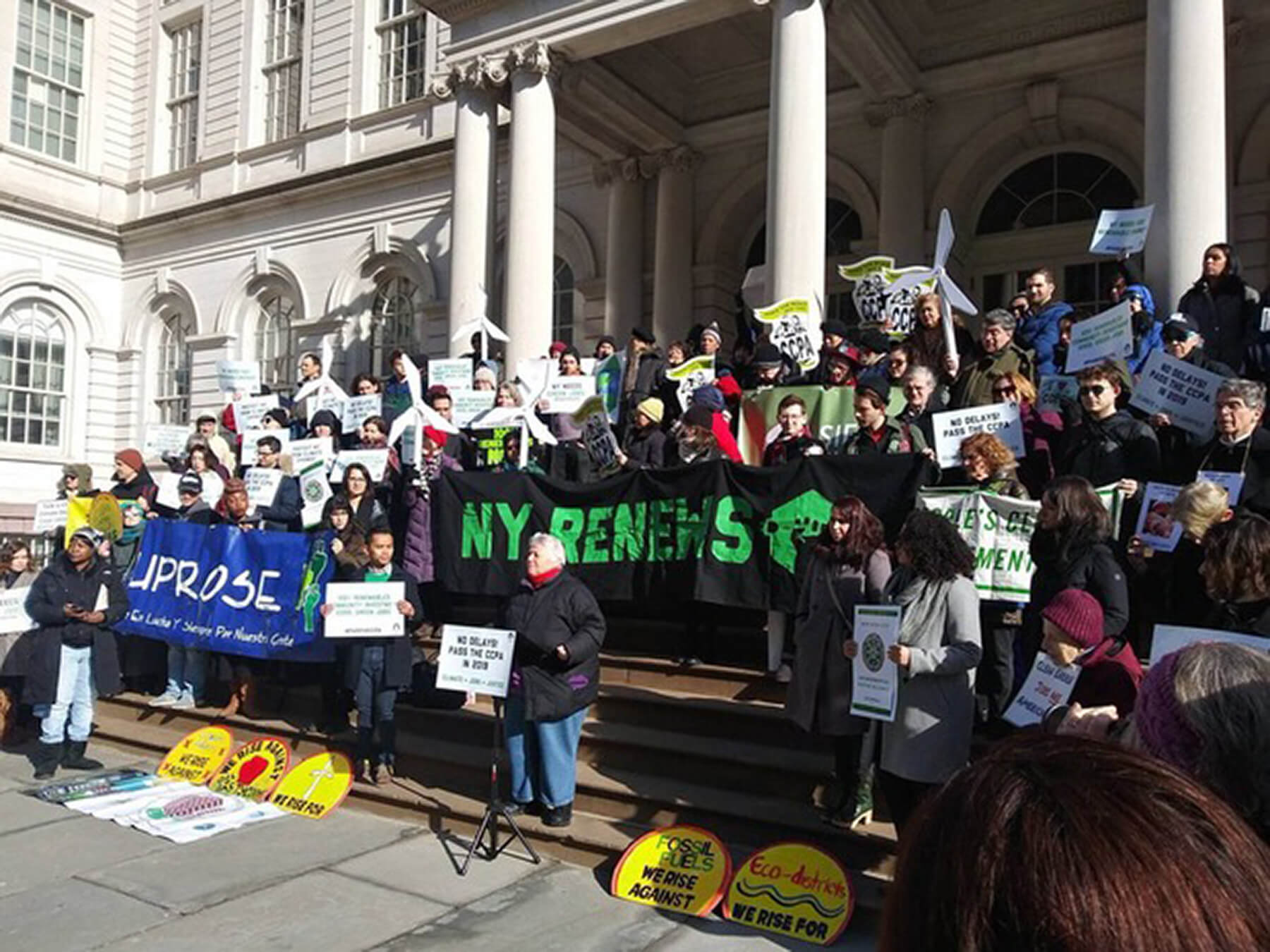 What has been successful in this organizing project?

“We had a very clear process and alignment on justice as a coalition. We took organizing the coalition and building with each other just as seriously as the legislation itself, and built trust and investment in the campaign through shared practice with one another.

Coalitions are hard. There’s lots of disagreement – about strategy, about tactics. But the disagreement represents different perspectives and different strengths. Coalition members brought these strengths powerfully to our work. They represented their bases and communities unapologetically. They turned their people out. Some people had strong relationships with legislators already. Some had the ability to develop the policy and provide data to back up our claims. Some were media makers and storytellers. Everyone had a clear role and gave generously to make the coalition strong. We mobilized on all fronts, because we had to.”

What have been the benefits and impacts so far?

NY Renews has passed the bill, a momentous and historic victory that also seeks ripple effects. The passage of the CLCPA changed the context for climate policy in New York State and the entire country, as it now represents a benchmark for the rest of the country. This remains true despite the fact that the coalition did not get everything they initially fought to include in the bill. The name itself changed from the Climate and Community Protection Act to the Climate Leadership and Community Protection Act. Some things were negotiated and changed in the last days of session, the last 48 hours before the bill was passed. The decrease in the percentage of investments going into disadvantaged communities was also accompanied by ambiguity in terms of what was required of those investments.

The greatest loss in the bill were the labor provisions that NY Renews fought for. The requirements for job quality standards, community benefits agreements, and local job creation were entirely stripped from the bill. Labor partners in the coalition, as well as other labor organizations, were organizing at the time around another bill that would have created strong procurement standards for jobs across sectors. The CLCPA was more specific to jobs created in the energy transition. The legislature said they would pull NY Renews’ labor provisions due to the larger bill with a wider scope that would get passed. Unfortunately, that bill did not get passed after and the provisions were taken out of the CLCPA, in a big blow to the labor movement and NYRenews.

Yet, this law represents the strongest requirements of any state in this country. It remains a very powerful example of where climate policy can go. By galvanizing people around this bill and passing it into law, the coalition has created a strong infrastructure from which to mobilize people in New York around climate policy for the future. The coalition has grown throughout the campaign, from 50 members to over 200 members from across the state. It has created an ecosystem of partners that are invested in just and equitable climate policy, and that will continue to work together to see through the implementation and to build on their vision for climate justice in New York.

NY Renews members recommend one main thing: Organize locally. Every context is different and every state will present different opportunities. New York’s particular political context was critical to how organizers worked to pass the bill. This refers not only to the makeup of and caucusing in the legislature, but other political opponents like the oil and gas industry, which was not very present nor actively mobilizing against this bill because their presence is minimal in New York state.

“The urgency of the climate crisis requires us to imagine the boldest policies that we can and to fight for them. We know that we might not get all what we ask for and we know that we have no other choice. Work to build power in your community, whatever the scale of that community. We need to organize and design policy that’s relevant to our people. People on the ground have the vision! For some of us, our role is to help make sure that vision can become a reality by removing obstacles.”